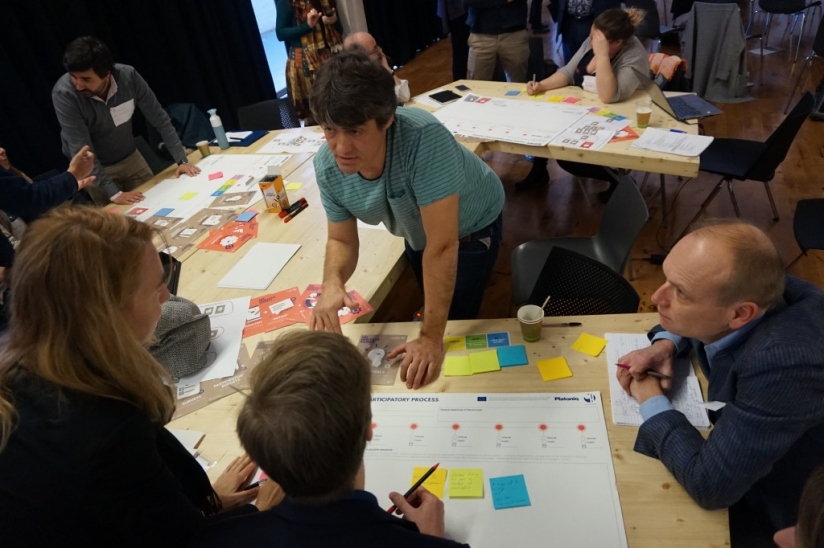 The “What - If - I” tool, a Platoniq’s in-house classic, allowed participants to identify scenarios for developing action in their respective heritage cases responding to one of the challenges identified in the previous.

WHAT IF AS ... type of user
I COULD ... specific action
WITH ... Tools/Content/Features from the Open Heritage platform
SO ... Main goal / benefit

The “What - If - I” helped groups structure the identified scenario along its building blocks creating the conditions for the following section “Design your participatory process”. 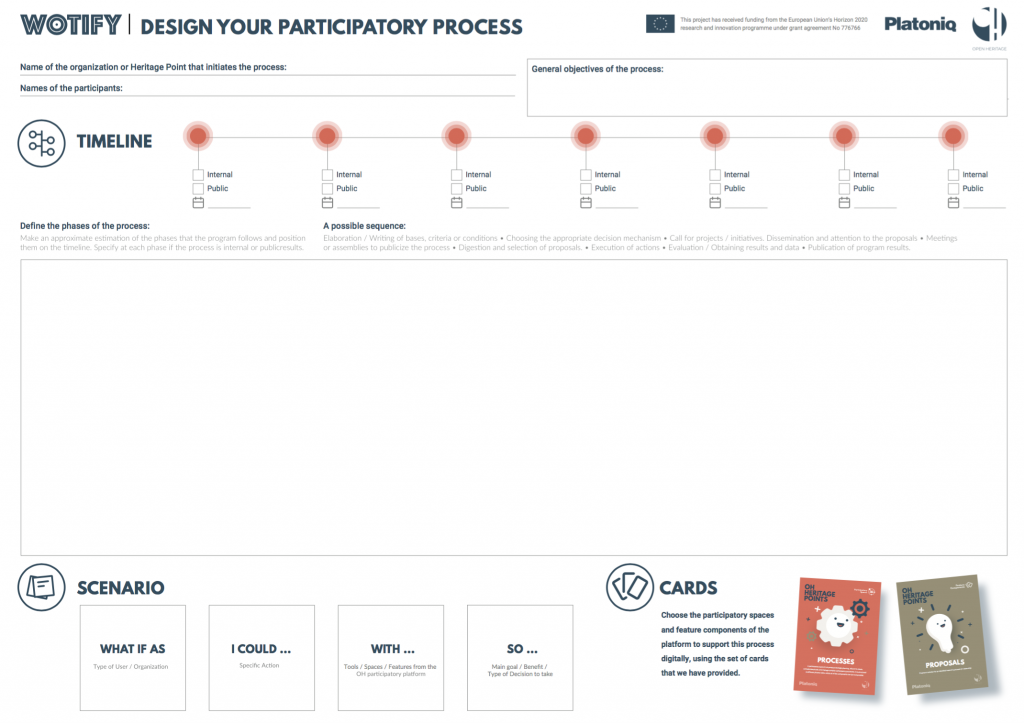 This dynamic supported participants in defining the different phases of their participatory process, placing them along an orientative timeline.

The set cards provided along with the canvas prompted a series of suggested steps and resources (the “participatory spaces”) which could be deployed through a participatory process. For example, these included “Processes”, “Assemblies”, “Consultations” or “Initiatives”. The methodology allowed participants to go into further details of the process, specifying what feature components could be useful (and activated through a digital participation platform to support the process digitally). These included: “Proposals”, “Voting”, “Meeting”, “Participatory budgets”, “Debates” and “Surveys”.

These are examples from three of the Labs participatory processes presented:

The case of the Marquês de Abrantes Lab in Lisbon counts with previous participatory experiences in the area. The goal of the intervention in this case would be to reinforce the level of community both offline and through online resources in order to achieve the creation of a community center. Meetings are a key tool and constant strategy identified for the process, building on what is already happening. The ignition of the collaborative project is planned to happen from the first phase with local partners. The ignition phase has been thought to include tools such as community mapping with local actors to manifest an active interest and create wider group participation and kick off decision making procedures for the action plan. The procedures for participatory decision making foreseen for this phase include meetings, debates and surveys. 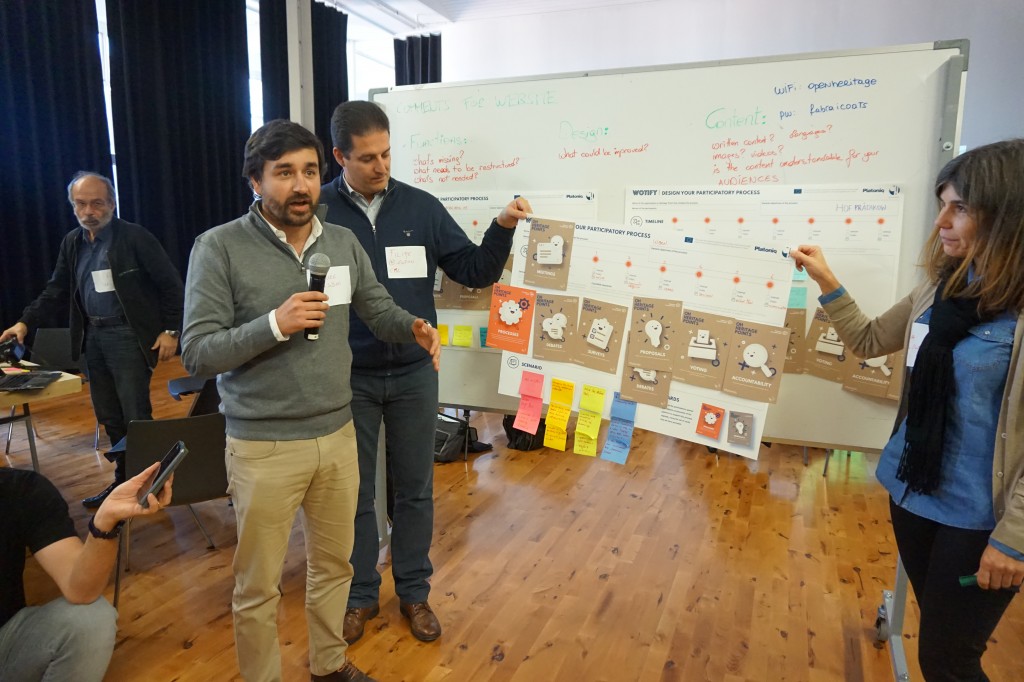 The case of Praga, the former working class neighborhood in Warsaw, focuses on a Lab that wants to connect different actors with sites that are currently available but are not being used.  In order to do so, the project wants to develop a toolbox for municipalities, local actors and other “players” to empower the local economy based on heritage resources and sustainability. The process followed by this project would  be structured around public survey, around developing framework proposals for entrepreneurial partners. It would not entail voting but it would recur to both internal and public meetings to present the outcomes of the project. Participatory budgets would form part of the project and accountability would be necessary throughout the life cycle of the project. The challenges presented by the project implementation would be inviting and having different actors participating, providing toolboxes that allow them to overcome obstacles which have not been overcome in the past. The process would have the overall goal of developing something that lasts beyond the project itself.

The case of the main street of Sunderland (UK): the specific project the group focused was how to get professional training students involved in the community, exploring what they could get from the training experience beyond the hard skills (plumbing, electricity etc). The group’s proposal was to get students to organise a gig in a week within the space previously built by them, supporting their engagement and motivation and following the “living classroom” approach. The ignition steps of this process would require mapping skills present in the college student group. It would also require getting proposals and ideas from students on what music bands could play at the gig. An implementation phase would follow.
The project would reach goals across a number of levels: expanding the expertise of the group of young people to collaborating with other profiles (e.g. media students), event organising, how to volunteer. Notably, the project could also reach the important objective of involving the broader local community in the recreational activity carried out through the gig, for example if students (all from a local background), brought friends and family along. Procedures to measure evolving opinions (surveys or meetings) would be required throughout the phases. Also, many different processes would necessarily take place simultaneously in the different phases and would involve different actors at the same time (teachers, students). 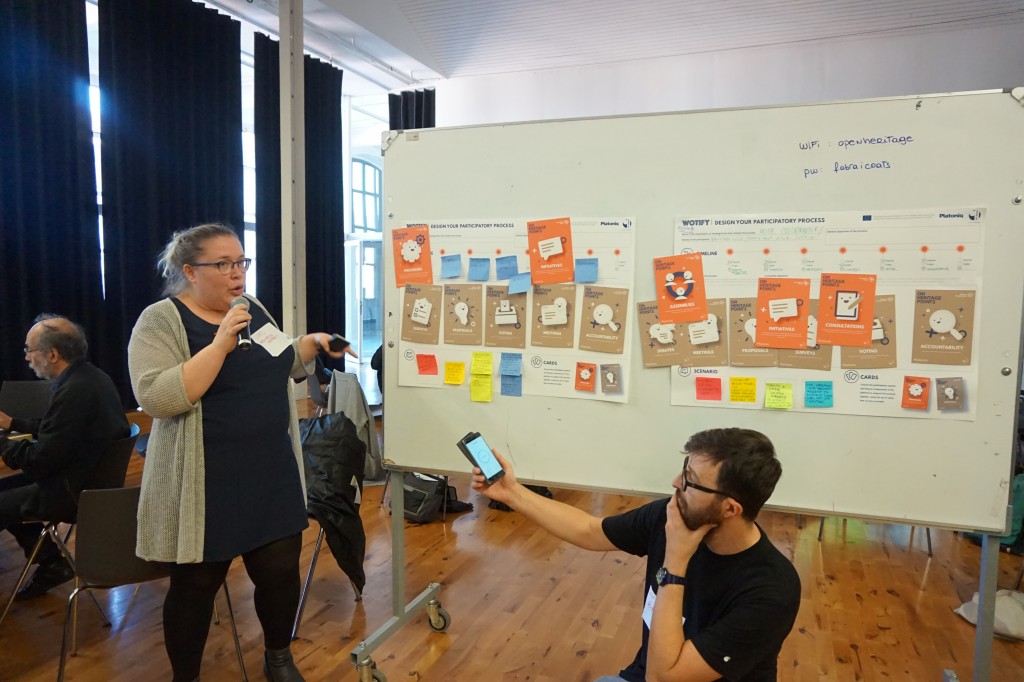 Over the next months we will be sharing further results from the meeting and will keep developing the OpenHeritage participatory spaces. We will be designing a programme for the progressive engagement of the consortium partners and the Cooperative Heritage Labs to participate and create a culture of open collaboration involving their local communities.

Next stop for OpenHeritage: Berlin meeting in spring!

The OpenHeritage project is part of an ecosystem of H2020 projects working on heritage. Looking forward to contributing to the implementation of the European Framework for Action on Cultural Heritage. 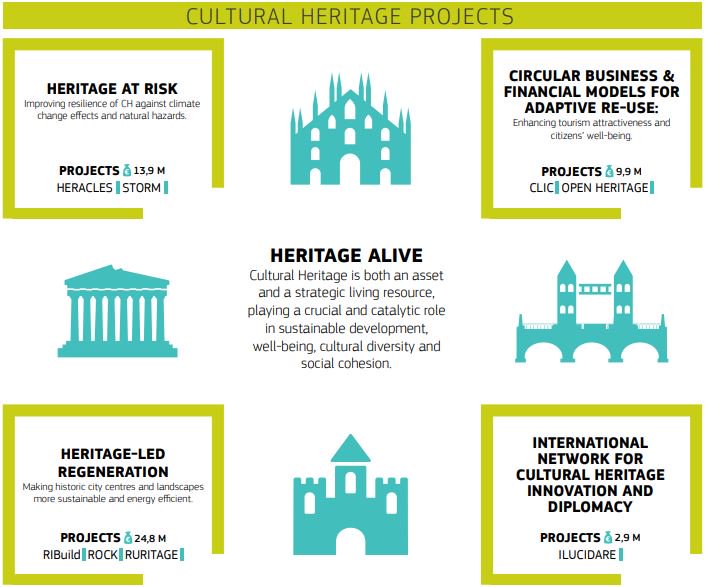 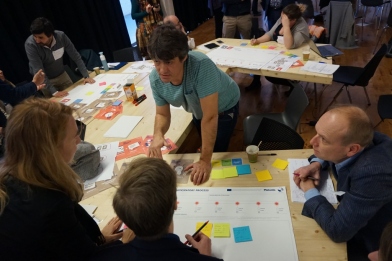